Feliz Navidad from a stranger

At 5000 metres above sea level yesterday I stood by an icy lake – on the side of Pastoruri. Thunder rolled above me and snow pelted down. It stung my nose, it covered my jumper, and it froze my fingers when I took my gloves off to make a snowman. […]

Among the living and the dead

A minute after taking this photo from these ruins, a group of drunken men lounging behind a house greeted me. Two of them walked up to speak to me, and they were slurring their speech. To be fair, their English and my Spanish were terrible, so it’s hard to tell […]

I’m probably the furthest from sea level I’ve ever been, wandering streets of a foreign city in the mountains on my own. I pass live guinea pigs trapped in nets (good eatin’) and elderly wrinkled tanned ladies in the same high top wide brim hats, wearing colourful jackets […]

Finding myself (without trying to)

Lately the days have remained the same. We wake gradually with hangovers, and in the afternoon we wander the beach, or sometimes nap. I go to the gym, and eventually go have dinner and very likely drink. I feel my character is being tested much the same as it was […]

People you see in Huanchaco | Photos

Hola to you, my sexy readers! It’s me, Burnzy, and while it’s my second blog post within 18 hours I just have a few photographs around the beach town of Huanchaco I can’t wait to share. My brother Aaron encouraged me to send him through some photos. I haven’t done […]

1. I must learn Spanish before I ask for a hair trim in a Peruvian barbershop. Bye bye hair 😦 2. Ego weighs you down (like hair). Beauty is never only skin deep. Only the bitter claim that. It’s pride that’s shallow and paper thin. 3. I’ve learned the definition […]

Lucky not to be alone here 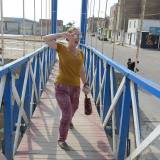 I have often traveled alone. And come to think of it, I have lived alone. That sounds like a bit of an ‘awww’ moment but to be honest I’ve actually enjoyed it. It’s easier to be confident in solitude, but also, you get your own way all the time. When […]

Introducing the Croc Hunter to Peru

I’m starting to figure out that Australia has an unfounded reputation for dangerous animals that want to kill everybody. Whether I’m talking to a Peruvian or a South African I learn that people are afraid of our snakes and spiders. Personally I think someone in our defence ministry realised that […]

Let’s go to the mall….today!

Yesterday Amy and I went out for lunch and decided to skip the lunch and drink alcohol instead. At some point we decided it was time we went to the movies, even if it was in Spanish. We took a taxi to a mall – which for the first time […]

I know I’m in Peru and it’s sort of expected that I have exciting adventures every day. But there reaches a point where you need alone time and a completely uneventful day to just gravitate back to who you are. We moved into a hostel about two days ago […]