Many years ago, in a small Australian primary school the size of three buildings including the library, the principal made an announcement. “The new Tintin collection is in the library,” she said. The older kids cheered, hissed their approval, and rushed for the comics. I did not know of Tintin but managed to grab a copy that interested me. It was of a picture with Tintin in a cave next to scary looking mummies, and the book was called ‘Prisoners of the Sun.’

I read it happily without realising that it was the sequel of another book called The Seven Crystal Balls, but in it, I learned of the existence of a South American country called Peru.  This book had it all! There were strange spitting creatures called Llamas, a secret civilization, gun fights, snowy mountains, anacondas…

Eventually I grew up, became a journalist, and bought a tiny white Diahatsu I nicknamed Snowy. Now, I live in Peru. I suppose, this series has been influential for me.

For months now I have thought about my copy of Prisoners of the Sun waiting somewhere in my grandma’s shed in Western Australia, wanting to read it to see what stereotypes or what history my inspiration revealed long before I was aware of it. And it just so happened that last week, while checking the only nearby bookstore that sells books in English, I found one Tintin comic. It was Prisoners of the Sun. I grabbed it, and began reading.

I always remembered how Tintin stood up to bullies. Even though he was much smaller, he was never afraid to challenge bad behaviour. I try to live like that.

And so, after a year of being a history teacher in Peru, I feel that I want to review this piece of work for what it is. Is this Tintin book a work of bigotry, of stereotypes and racism, or is it a grand adventure using history and the geography as a plot device?

Well, it is time to pass judgement on my childhood inspiration, Herge.

Prisoners of the Sun: A Review

Tintin’s and Captain Haddock’s friend Professor Calculus has been kidnapped and taken by boat to Peru, after once opening the tomb of an old Incan priest, at the end of The Seven Crystal Balls. The second part of the story begins in the port of Callao, Peru, where the heroes wait for the ship.

They then follow a Quechuan group taking the professor further inland through the key climates (Herge might be unaware that he represents the key three colonial Spanish definitions of Peru’s geography when the plot begins on the coast, moves into the mountains, and then covers the jungle), until they reach the secret city of the existing line of the Inca.

The way that Tintin, Captain Haddock, and their young Peruvian friend (who they rescue from Creole oppressors) escape the wrath of the unnamed Incan emperor at the end seems weak. They will be burnt at the stake using mirrors from the sun ‘Inti’, but are able to choose the day of their death as a courtesy. Tintin chooses the predicted time of a solar eclipse, and banishes Inti until calling on him to return. The Inca and his people are filled with superstitious awe, and let them go, even trusting on their secret of the Inca’s existence.

It’s not the fact that this idea has been overused in fiction, that makes this idea weak. Prisoners of the Sun was published in 1949 and cannot be blamed for copycats using the plot device. It’s just possibly not doing credit to the Incas, who were said to be brilliant astrologers. Unless the fall of knowledge was very far for the neo-Incan race (and this is possible. Much would have been lost in the 16th century between the Incas Manco Capac and the last Inca Tupac Amaru), then the Incas would have predicted a simple solar eclipse which had been mentioned in the very newspaper that Tintin was reading in his cell chamber.

The other odd thing about the book’s story telling narrative is the use of Spanish in the dialogue. Most conversation is in English, which is fair considering that Captain Haddock, Tintin, and police officers do most of the talking. There is some Spanish, but the funny thing is that the further inland into Peru that the heroes journey into, the more English is heard. The Inca himself has an excellent command of English that would be a credit to the typical Lima resident of today. It certainly makes no sense that the boy orange seller Zorrino, who Tintin protects in the highlands, also has a great command of English.

The book is still a credit, and not a large insult, to Peru in general. It definitely pays tribute to Peru’s biodiversity, and recognises the Condor, the Llama, and the creatures of the jungle. It doesn’t recognise Machu Picchu (and perhaps this isn’t a bad thing), but does show the mountains, the snow, the cloud forests, and the decorative colours of the Quechua people. It mentions three places by names (and perhaps features Cusco at the end), which are Callao, the train station at the small town of Santa Clara, and a place in the highlands called Jauga.

The places mentioned might be an interesting choice if one wanted to write about Peru today, and shows a difference in the built-up environment from 1949. Callao is an odd name to begin an adventure in Peru over Lima, but it makes sense choosing the capital’s key port for the opening scene. But after a few hours walk through the countryside Tintin arrives in Santa Clara. After a quick check on Google it appears that there is a Santa Clara Station, and that is surrounded by the Lima inner suburbs. 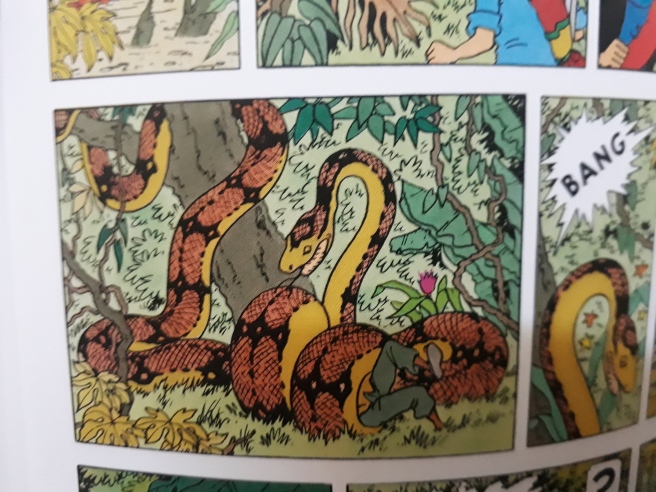 My Peruvian girlfriend seemed surprised at the name of Jauga, but after a quick check online it appears it is actually called ‘Jauja’, and was historically referred to as Xauxa. It actually has a historical importance I was previously unaware of, and it makes sense why Herge might have chosen it as the last named city in the book before entering the wilderness.

It was originally the Spanish capital when the conquerors arrived in 1532, before their leader Pizarro determined on a more coastal local location. He established a city called ‘Ciudad de los Reyes.’ You might know it as Lima. But Jauja, apparently and according to Wikipedia, was the land of milk and honey. It exists today, sure, but is overshadowed by the more larger region capital, Huancayo.

The Prisoners of the Sun is colourful, creative, and with genuine laugh-out moments between Captain Haddock and his nemesis the Llama. It has traces of post-colonial superiority and some uncomfortable usage of words such as ‘Indian’. Its locations might be out of date, but it rarely uses them, preferring to venture into the natural landscapes that are still of relevance today. It is a different sort of book well worth reading if seeking a European’s point of view and visual representation of the country, and it in itself might actually be of historical value.

Interview in this very spot.
Summer's nearly over. But I prefer Autumn. Picture: Richard Mamando
Watching Friends with the crew on a Friday night. Pizza y cervezas.
Mmm....k-roo. 4.5 stars
Gift from Bundaberg’s Chinese sister city of Nanning among the wall of gifts in the Bundaberg Regional Council office.
Realised I could add #youtube to my #nintendoswitch. So that's my bathroom morning music sorted. Con #pedrosuarezvertiz
I publish a photo, and it reminds me to keep looking after myself. Eat good food, keep exercising, and stay off the alcohol. Photo: Richard Mamando Location: Surfers Paradise
First valentines in Bundaberg.
Flashback. Zorritos, north Peru. A photo taken of a Kiwi named Guy.
Already locked in my vote. Wasn't who I intended it to be either. #swingvoter #australiadecides #eurovisionaustralia
When I did a presentation on the cassowary in my TEFL course in northern Peru, everyone thought I was making up a bunch of crap.
Concrete honey
Green!
Two more months and I’ll be back in Latam!
My determined face. Not to be mistaken for my thinking or confused face, my angry, my *hangry, the pre-coffee in the morning, and the looming deadline expressions. *I was very hangry though. Picture: Richard Mamando
Location: Hilton Surfers Paradise Photo: #richardmamando Thank you @manhunt_australia and sponsors, including @nair_au and @skino2au for giving me the opportunity in November.
Turns out Cloudland in Brisbane does Spanish party dancing on Thursday nights. I didn't dance much, to amiga Priscilla's dismay, but it was great to people watch and soak in this clash of worlds in the valley.